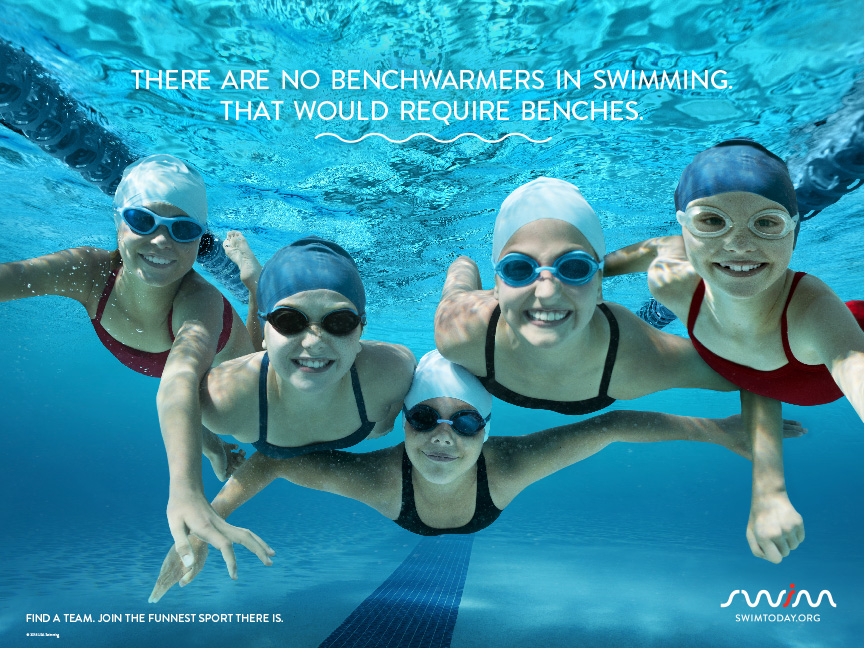 If you ask kids what the FUNNEST sport is, you will get a lot of different answers – from soccer, to gymnastics, softball and everything else in between. Not a lot of them will raise their hand and say swimming. But if you ask the question a different way, like “what is the best part about summer?” I bet almost all of them will say SWIMMING and going to the pool.

First, from the press release:

Ten industry partners, including USA Swimming, are collaborating on a summer-long campaign called SwimToday, led by five-time Olympian and 12-time medalist, Dara Torres. Launching today, the lighthearted campaign proclaims swimming as “the funnest sport there is” and showcases its many benefits in an effort to bring more kids who know how to swim into the sport of swimming.

According to the 2014 State of the Competitive & Fitness Swimming Industry Report by Sports Marketing Surveys, the exclusive research provider to the Sports & Fitness Industry Association, nearly 80 percent of parents overlook swimming when choosing organized sports activities for their children after they learn to swim. Most notably, parents whose children had never tried swimming perceived it to be less fun than other sports. However, parents of swimmers rated the sport at the top in fun, teamwork, confidence-building and health and fitness once they gave it a try.

The campaign is endorsed and supported by 10 leading swimming industry partners, including membership organizations, coaches associations, swimsuit and equipment manufacturers, swimming media, and technology partners. The “Funnest Sport” campaign will also address common misconceptions about the sport, encouraging more parents to consider swimming as a youth sport option for their children.

Torres, a lifelong swimmer, entered her first international swimming competition at age 14 and in 2008 became the oldest swimmer to compete in an Olympic Games. Now a “swim mom” herself, she cheers her daughter on at swim practice and understands the challenges parents face as they make decisions about how their children will spend their time.

“I started swimming as a kid and it gave me skills I’ve used throughout my life,” said Torres. “Now I have an 8-year-old daughter who is on a swim team and loves it. I see her benefitting from the same things I did, and I want other moms to know how much fun it can be and what a lifelong gift it is for our kids.”

As part of this campaign, I was given the opportunity to talk with Dara Torres on the phone last week about swimming and why it is the FUNNEST sport. But, I already knew why! While Dara’s daughter is just now starting to swim competitively, all three of my kids have done so in some capacity – summer league, year round competitive team and high school swim – over the last seven years. I know it’s fun – not just for the kids either – it is a very family friendly sport. 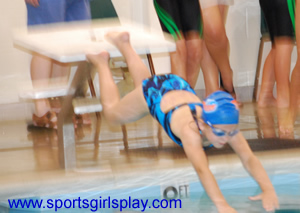 Here are a few of the reasons my own kids love swimming on a team (and my 5 Reasons to Join a Summer Swim Team):

In talking with Dara, we both agree that swimming teaches so much more than just swimming (that in itself is a life long skill).  Of course, it is most important that your child is watersafe at a young age – and swim lessons are great way to start, but once they can swim, competitive swimming can teach so much more. Things like self confidence, team work, setting goals and time management are just a few of them.

Over the past seven years, I have watched the friendships made at the pool grow – not just with the kids either. As swim parents, you have to get involved, too. From timing to officiating, concessions and awards, it takes volunteers, but some of my closest friends are those I have met timing or helping to run swim meets. I asked Dara what job she usually does at her daughter’s meets and she responded, “timer.” Timing a meet is a blast – you get to see every race and be right in the middle of the action!

Summer swim season for us starts the Tuesday after Memorial Day and even though only one of my kids is swimming this summer (well, maybe two), we are so excited for another FUN summer of swim, friendships, team spirit, and staying fit!

For more information on getting started with a swim program in your area, visit SwimToday.org.