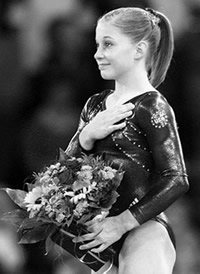 The Visa Championships serve as the USA Nationals where the National team is set. The 13 members of the Senior National Team plus 6 others (who were invited based on past performances) will be contending for spots on the Olympic team at the Trials event. These gymnasts include:

Two more weekends! That’s two more weekends to go until we get to see 19 of the best gymnasts in the US vie for a spot on the Olympic team in Philadelphia. I bought my tickets for Trials six months ago and have been counting down the time ever since. My daughters and I will be spending the weekend and taking in all the events. I will be taking my camera and will keep you posted.

The womens gymnastics team always seem to be the darlings of the Olympic games and I am sure which ever 7 (6 plus an alternate) make it this year, they will capture hearts around the world.

Check out even more pictures of Shawn Johnson at her Flickr group.