So, I have a thing for shoes – not pumps or strappy sandals, but athletic shoes. There are more athletic shoes – from golf cleats to running shoes – in my closet than there will ever be dress shoes! 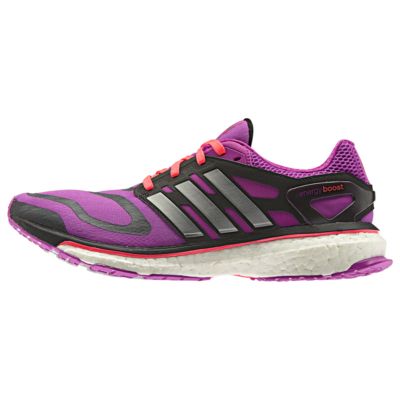 adidas has so many new products, it’s hard to choose just a few…but one of my favorites has to be the all new Energy Boost Running shoes. The colors are hot and perfect for summer! They are designed with an energy-returning boost™ midsole, these running shoes feature a techfit™ upper and the TORSION® SYSTEM for support. But, here’s a tip, they run small so order a 1/2 size up for maximum comfort.

The best part, adidas is offering free shipping through 6/14/13. This is the perfect opportunity to get a fun new pair of running shoes for you – and they have them in men’s as well, if you wanted to surprise your favorite Dad with a new pair, too.  Head over to adidas today to check out all their great new products.

So, what’s in your closet – dress shoes or cool athletic shoes like these adidas ones? 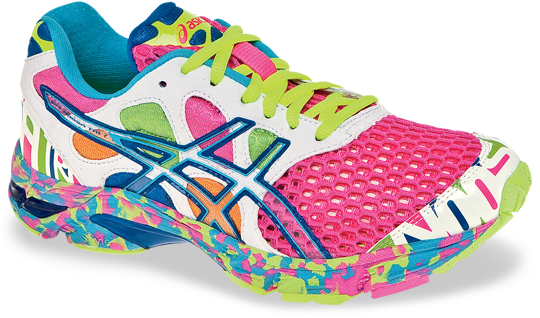 I was at my daughter’s swim meet a few weeks ago when I saw this woman wearing the most colorful running shoes I can remember seeing in a LONG time! Having been an Asics fan since I got my first pair during high school cross country almost 30 years ago, I had to find out where I could get these!

and they are designed to be a lightweight training or racing shoe perfect for triathletes. They have speed lacing and no-slip footbeds and are designed to be comfortable with or without socks. Reviews have been mixed as to whether or not you should go up a half size in these shoes or not so you may want to try them on at your local store first or get them from my favorite place, Zappos, since shipping is free both ways if you need to return them.

The ASICS Gel-Noosa Tri 7 is priced around $120 which puts it right into what I consider a mid-range running shoe. And while I know these are designed for racing, they are so cute and Asics are so comfortable, I am considering getting a pair for low mileage training days and wearing when I coach conditioning with the kids at the pool.

This is a guest post by my friend and fellow Sports Mom, Tricia, who was kind enough to share her daughter’s perspective on her first season of middle school cross country with us.

When my husband and I had kids, we had a pretty good idea that they wouldn’t be very “athletic.” We’re kind of a nerdy couple who do not play any sports ourselves and tend to focus on activities like computers and theater. Yet over the last several years I knew that we needed to create some healthier habits in our house, so I took up running. After running two half marathons myself, I convinced my husband to join me for my third. Before too long, my older daughter Jillian (who is 10), decided that it looked interesting to her as well and started running a couple of miles at a time. 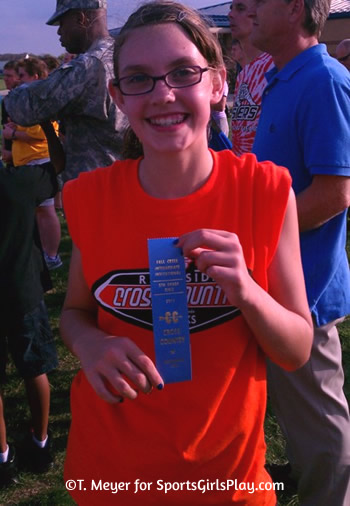 At intermediate school orientation I saw a sign for cross country. I asked Jillian if she might be interested and she decided to give it a try. It only lasted about 7 weeks, but it was a great experience for her both from a physical standpoint of getting exercise and the mental standpoint of achievement. I asked her the other day to answer a few questions about her experience and here is what she had to say:

Tricia:  Did you ever think that you would be competing in a sporting event? Jillian: No, actually, I didn’t. I never thought about it much. I’m usually into stuff like composing music, and choreographing dances. I’ve never played soccer or basketball or anything like some of my friends. The closest that I ever got was taking gymnastics when I was little.

Tricia: What is your favorite thing about being a runner? Jillian: Finishing. When you’re a runner, the best feeling is the feeling to finish a race and to say in your head, “I did it.”

Tricia: What were you thinking as you were running through the course during your first meet? Jillian: At the start of the race I was just trying to listen to the rules. Then as I was running I started thinking, “Oh my gosh. How am I going to finish this?” But I just kept telling myself to keep going, and to finish strong.

What would you tell other girls thinking about starting cross country? I would tell them to try it once. If they like it, continue. If they don’t, stop.

Tricia: What are your future plans for running? Jillian: I am probably going to continue to race. And to compete in longer distances than a mile. Like the 5k Race for the Cure.

My sincere hope is that I am instilling a lifelong love of running in Jillian because I have found it to be one of the only activities that I have no excuse not to keep up with. I can run on vacation or at my in-laws’ home. I can run by myself or with friends. And now I can run with my daughter.

Tricia Meyer is the owner of Helping Moms Connect and other female-focused blog sites. She is a mom to two daughters, Jillian and Cassie, and hopes to eventually be running half marathons with both of them.