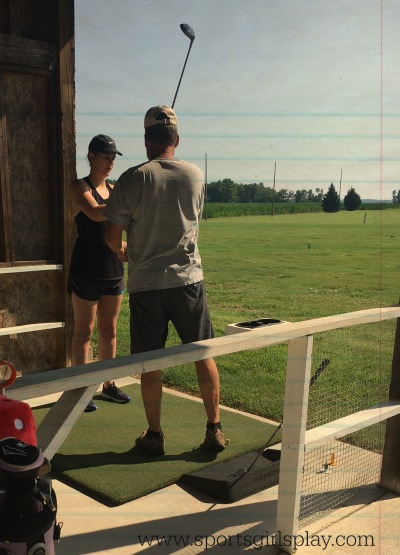 A few weeks ago my daughter (a rising high school junior) and I headed to our local driving range to hit off a few buckets of golf balls on a Sunday morning. While taking our turns, the owner of the range stopped out to say hello and he was somewhat surprised to see the Mother-Daughter team we made. He gave us some tips on our strokes and we talked about high schools, high school sports and of course, golf.

After watching my daughter hit golf ball after golf ball, he asked if she played high school golf. She said she had not thought about it before (she cheers for football season and swims during winter), but may now consider it. The golf pro then shared a little tidbit with her and her whole outlook changed!

According to the LA Times, the National College Athletic Assn. (NCAA) estimates that every year 200 college golf scholarships for young women go unclaimed. Too few girls compete in the sport to qualify for these scholarships, which means many young women are missing an opportunity that could make all the difference to their education, their income and their future.

Golf is a sport that all ages can enjoy and if you have a girl who is showing interest, sign her up for a camp, find some local junior golf clinics in your area and when she gets to high school age, encourage her to play high school golf. You just might discover a hidden talent and open up new opportunities!

I watched the NCAA Championship meet online yesterday and without a doubt, that was one of the best Super Six meets I have seen! The level of gymnastics was ahhh-mazing! The gymnasts were ridiculously consistent and polished – and best of all – they really looked like they were having fun. At the half way point of the meet, Alabama and UCLA were tied – talk about well-matched teams. In the end, Alabama’s incredibly deep team and near flawless performances allowed the Crimson Tide to hold off UCLA for the win.

UCLA got second and the team that most impressed me (basically because I haven’t been watching college gymnastics closely this season and was taken off guard) was the University of Oklahoma. They are definitely a team to watch!! They are only losing two routines next year due to graduating seniors which puts them in a fantastic position for next season. Juniors Megan Ferguson (who reminds me so much of my own daughter, named Megan, that it is scary) and Sarah Stone along with former National Team Member Natasha Kelley and the rest of their team performed with purpose and polish. Watch the OU team warming up on beam:

The Super Six team finals will air tape-delayed on CBS, Saturday, May 14, at 3 p.m. ET. – even if you watched the coverage online yesterday, I highly recommend watching the televised broadcast – it will be good gymnastics!

For more coverage and commentary on the NCAA Gymnastics Championships, check out:

You can watch the event finals today – live on NCAA.com.

Whether you are the parent of a college bound gymnasts looking for the latest recruiting information, a college coach looking for a list of up and comers to begin keeping watch of, or a die-hard college gymnastics fan, you have to add CollegeGymFans.com to your regular reading – if you haven’t already.

CollegeGymFans.com is the single most comprehensive portal of information, news, results, and community for college gymnastics. Every single Division I, II, and III NCAA school that has a women’s (or men’s) gymnastics program is listed – with links to their websites. Additionally, there is an extensive database of gymnasts from across the US (and beyond) that are eligible for recruiting during any given year and it is updated as gymnasts make verbal and written commitments to various schools.