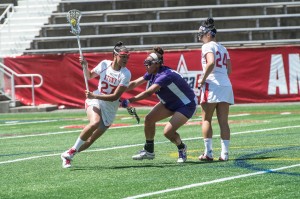 The former Seawolves midfielder was Stony Brook’s first ever Tewaaraton nominee. In her two seasons at Stony Brook, Cook led the team to win its very first NCAA tournament game and to its winningest season. The Nesconset, NY native played two seasons at Adelphi University before transferring to Stony Brook where she holds the school record for single season goals and single season draw controls. One of the nation’s best two-way players, Cook was named All American First Team, All-Region America East Player of the Year and America East All-Tournament Team.

“Coming off Team STX’s championship win at the Vail Shootout, Demmianne adds another level of excitement to the team, ” said Carrie Gamper, Assistant Brand Manager at STX. “Demmianne is an outstanding athlete and leader on the field and will be joining some of the best players in women’s lacrosse.”

Team STX looks to change the landscape of post-collegiate women’s lacrosse, giving players the opportunity to compete at the highest levels of the women’s lacrosse circuit. In addition, Team STX will contribute to the company’s grassroots efforts to expand the reach of the game.

STX is a global sporting goods leader in the sports of lacrosse, field hockey and golf. With its 1970 introduction of the first synthetic lacrosse head, STX ushered in the “modern era” of what is now the fastest growing team sport. Based in Baltimore, the home of lacrosse, STX has been universally recognized for innovation in product design and development. STX continues to strive for new performance standards in sporting goods equipment at the highest levels of competition. For more information, visit http://www.stx.com. 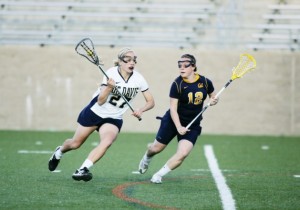 When it comes to college lacrosse, no one ever anticipated the UC Davis Women’s Club lacrosse team to become a championship team. In fact, when they entered The US Lacrosse Women’s Collegiate Lacrosse Association Division I National Championship Tournament, no one really even gave them a second look, and years before, they had trouble even getting bids.

Initially, the UC Davis team didn’t have much going for them. As a young club of only four years and frequent losers, lacrosse enthusiasts didn’t have much faith in the team and were sure they would be out of the upcoming tournament just as quickly as they entered it.

However, the women of the Aggies weren’t ready to hang up their cleats for the season.

Instead of giving up, the team laced up their lacrosse footwear and headed to the tournament to see if they couldn’t finally get a bid to the Nationals. Ranked 10th, the UC Davis Aggies were expected to be knocked out in the first round by Texas. However, they won, and by doing so started a trend that would upset an entire tournament. Soon after, UC Davis came back from a 5-point deficit to beat UC Santa Barbara, ranked #2, in overtime. Facing third ranked Michigan, prospects didn’t look so good. However, the Aggie women won in overtime, and packed their bags for the National Championship.

Although they were headed to play Colorado State, reigning champions coming from a 14-game winning streak, the ladies of UC Davis were ready to take on the challenge.

“We prepared for that game,” stated senior UC Davis attacker, Lauren Colby. “We dissected their defense and we knew exactly what we had to do to win.”

The Aggies fought hard, and were able to bring themselves to a 8-7 lead in the second half. With 13 minutes left in the game, they fought hard to keep the ball in their possession for 12 of those minutes. Their well executed stalling, as well as their superb defense, allowed them to win – in full movie-like fashion.

While lacrosse enthusiasts are generally apt to follow the lacrosse fields trampled by men’s cleats, anyone who loves the sport, missed out on an epic match if they didn’t follow the underdog story of the Aggie’s this year. Not only did the team seem to come from nowhere, they truly exhibited the qualities of a great club in the making. In addition to winning the National Championship title, the team also received several well-earned All-Division I team honors. Even though seven of the team’s seniors graduate this year, there is no doubt that women’s lacrosse will continue to see great things from the Aggies in the future. 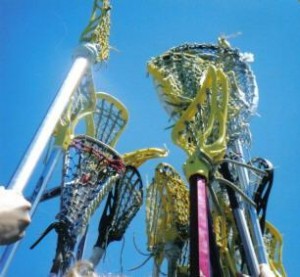 When my daughter came to me a few years ago expressing interest in joining the local lacrosse league with some friends, I was overjoyed! She had always been athletic, and I thought it would be another great opportunity to get involved and stay active.  But although we were all excited to take on a new sport, as an inexperienced “lacrosse mom,” I had absolutely no idea what I was getting into. We went looking for gear and I quickly became overwhelmed by the huge selection of women’s lacrosse gloves, goggles, and lacrosse helmets…not to mention the ridiculous array of youth lacrosse sticks, heads, and shafts to choose from out there. Thankfully, after research and experience, I now know more about the game, and have grown to love it, and what it does for my daughter, but I always wish someone had taken me aside and given me a crash course in lax gear when she was just getting started. I doubt that I’m alone here, so I figured it’d be helpful to all of the newly initiated or soon-to-be lacrosse parents out there for me to jot down some helpful hints when looking for a women’s lacrosse stick.

You may not know this, but you don’t need to spend a lot of money to get great lacrosse gear, especially if your daughter is just starting out. Higher-end lacrosse heads and shafts are going to make a big difference in her game, but if she’s new to the sport, you can shoot for the middle of the road for now and go up from there. It’s also important to know that lacrosse sticks are actually two separate parts. You can purchase the head and shaft separately, and built you own lacrosse stick, to meet your daughter’s exact needs on the field. You can also purchase a complete lacrosse stick and get everything you need in one fell swoop. I recommend complete sticks for first time players. They take a lot of the guess work out of gear shopping, help develop preferences, and are typically cheaper than purchasing the head and shaft separately. Advanced players will want to buy them individually to get the most customization out of their game though.

Lacrosse heads are, for me at least, the most complicated piece of equipment to purchase. They have the most direct influence on her game, affecting ball control, passing and shot accuracy, and defensive maneuvering, so I have always erred on the higher-end of things. But for new lacrosse parents, it’s more important to understand what you’re getting from a woman’s lacrosse head, than to just blindly buy an expensive one. When looking for a new lacrosse head, understand and consider:

Lacrosse shafts are just as varied, although somewhat less complicated than lacrosse heads. The higher-end shafts are going to be stronger and lighter than the more cost-effective ones. However, if your daughter is just starting out, the differences are going to be negligible, especially since women’s lacrosse has less contact than men’s, and shaft strength is less of a concern. When searching and pricing lacrosse handles, take into account:

Overall, the idea is find a lacrosse stick that works for her style and skill level, and fits your budget. There are plenty of options out there, and sticks can range anywhere from $20 to $150, and beyond, making it easy to get lost. Hopefully this information helped clear some things up a bit, and makes it a little easier for you to get your girl ready for the game. Good luck out there!