Hockey is mostly known as a sport for men only, but with the increasing interest of women, this is no longer the case. There is a long list of male hockey superstars and great teams but little attention has been brought to the growing eminence of female hockey. Since all the focus in the media right now is on the NHL and the playoffs, now is the perfect time to take a look at women’s hockey.

Playing in four straight Olympics and emerging with three silver medals and one bronze, Chu has had a very successful hockey career. As a member of Team USA, her goal of winning a gold medal in Sochi this year came up short in a loss to longtime rival Canada. Chu is also a member of the Montreal Stars where she continues her hockey play in Canada’s women’s league when she is not participating in the Olympics.

With few opportunities for high level female players available, Olympic goaltender Shannon Szabados decided to try her hand at the men’s game. Szabados, a two time Olympic gold medalist with Canada as they eliminated the USA in Sochi, became one of the first women to ever play in a men’s professional sports league when she joined the Columbus Cottonmouths in the Southern Professional Hockey League. Szabados’ participation began last month in a lost to the Knoxville Ice Bears.

Although hockey is a dangerous sport, especially in the NHL, Szabados is an example of why women have the ability to play in a men’s league. Until women’s leagues become more developed, we may see more female players follow Szabados to the men’s leagues. 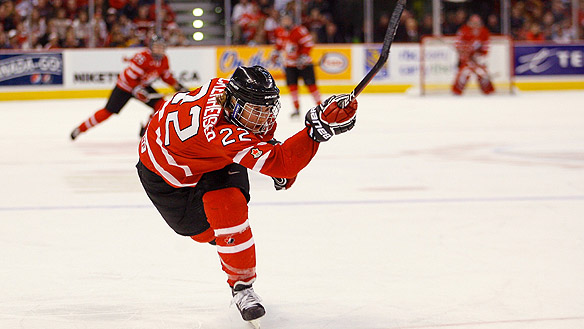 At the early age of 15, Hayley was selected to join the Canadian Women’s National Team, and has since led the team to 6 gold medals and 1 silver medal. Recently in Sochi, it was noted that Haley was key to her team winning the gold medal, despite playing with a broken foot. Making history similar to her female hockey companions, she was the first women to  play for a men’s team in a position other than goalie. She made history joining the Kirkkonummen Salamat, a team in Finland’s second division, and became the first woman to score a point in a men’s game in 2003.

Other than of hockey, Hayley has had other professions. Also great at softball, she participated in the sport at 2000 Summer Olympics, and was a softball analyst for CBS in their coverage of the 2008 Beijing Summer Olympics. 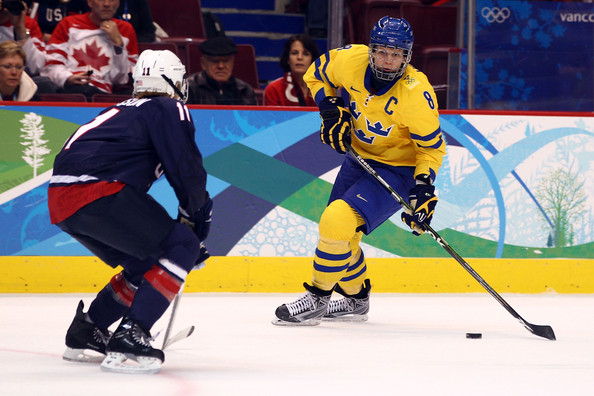 With so many great female players, there are some that are considered true legends to the game of hockey, and Erika Holst is definitely considered one of them. As the captain of the Swedish national team, she was always in attack mode on the offensive end. Her offensive prowess led her team to an Olympic bronze medal by scoring five goals in five games in 2002. To extend her great track record, she also led her team to the silver medal in the 2006 Olympics. The Swedish player also had a very impressive college record that consisted of consecutive NCAA championships from 2001-2003.

To maintain her greatness on the ice, Holst has a rigorous weekly training schedule that consists of 4 nights of training with the team, 2 games, and training on her own before lunch each day.

Holst also passes on her hockey experience to younger players as a guest at many summer hockey camps in Sweden. She also works for the Swedish Ice Hockey Federation, where she’s responsible for the development of women’s hockey.

As support for women’s hockey continues to increase and more leagues develop, hockey will finally lost its status as a sport for men only. These are just four of the many great female hockey players that deserve recognition at the level that men receive. These days it’s easier than ever to find and support women’s hockey, since women’s NCAA games can now be viewed through the sports channels, and many international games are available online and as Direct Television Specials. As long as women continue to be to interested in playing, women’s hockey will continue to flourish!

We are watching preseason NHL hockey tonight and I just saw my new favorite commercial!! Technically this is part of the NHL’s Hockey is for Everyone public service campaign, but the focus is on girls and dispelling the notion that hockey is a boy’s sport. “Whoever says girls can’t play hockey hasn’t seen me” is the best line!

I love that they show that girls can be girls – purple nail polish and all – and still like to put on their skates, shoulder pads and helmets and skate FAST. I love that it talks about making friends through hockey. I love that it shows little girls doing hockey drills side by side with older girls.

Well done NHL!! This commercial is a great way to show girls that hockey is a fun, challenging and rewarding sport that everyone can play.

Tomorrow the hallowed halls of the Hockey Hall of Fame will be graced by two amazing women, USA’s Cammi Granato and Canada’s Angela James, along side the “Great One” Wayne Gretsky and other hockey legends. How cool is that?

Angela and Cammi will be the first women inducted into the Hockey Hall of Fame and the event will be televised tonight, Monday, November 8, 2010 at 7:30 pm on NHL Network US from the event in Toronto, Canada.

Cammi Granato grew up in a hockey family of 4 boys and 2 girls and is best known for her role as the Captain of the 1998 Gold Medal US Olympic Women’s Hockey Team. She was the first woman inducted into the US Hockey Hall of Fame in 2008 and is International Hockey’s ALL TIME leading scorer for women with 54 goals and 96 points in 54 games. Now she lives in Vancouver with her husband and 2 children and also serves as a spokesperson for LetsMove.gov, a non-profit organization headed up by First Lady Michelle Obama and aimed at health, fitness and nutrition education for youth.

Angela James has been referred to as the “Wayne Gretsky of Women’s Hockey” for her extraordinary contributions to the sport. She has even played every position in hockey – to include goalie!

Congratulations Ladies! You are an inspiration to so many!