In May I reviewed a new tween chapter book series called  Go-for-Gold Gymnasts that has been a huge hit with my daughter and her friends and I am happy to announce that I get to give the complete set of four books away to one lucky reader.

The Go-for-Gold Gymnasts series by Olympic gymnast Dominique Moceanu and Alicia Thompson is perfect for summer reading. The chapter book series consists of four books each highlighting the challenges and triumphs of four high level gymnasts between the ages of 12 and 14.  While there are four books in the series, you don’t have to read them in any specific order for them to make sense – the cast of characters is basically the same but the stories stand on their own. Four books, four events in gymnastics and four friends.

You can read my complete review and book synopsis at: Go-for-Gold Gymnasts Book Series Review.

How do you enter:

Required entry: Leave us a comment on THIS post letting us know if you or a friend is a gymnast, what your favorite event in gymnastics is, and the biggest challenge you face/have overcome in your sport.

Bonus entries: Get BONUS ENTRIES by letting your friends know about our giveaway. Get one extra entry for each of the following, but come back and leave a second comment telling us where you shared it:

Disclosure: I received a set of the books for review and giveaway purposes, but all opinions are my own.

If you have a tween or teen gymnast in your house, I have a chapter book series to recommend! The Go-for-Gold Gymnasts series by Olympic gymnast Dominique Moceanu and Alicia Thompson is perfect for summer reading. The chapter book series consists of four books each highlighting the challenges and triumphs of four high level gymnasts between the ages of 12 and 14.  While there are four books in the series, you don’t have to read them in any specific order for them to make sense – the cast of characters is basically the same but the stories stand on their own. Four books, four events in gymnastics and four friends. 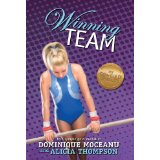 Winning Team: Twelve-year-old Brittany Lee Morgan is the best. Or, at least she was at her gymnastics training gym in Ohio. But when her family moves to Texas for a world-class facility, Britt is suddenly a zero in the eyes of her new teammates. The other girls—graceful Christina, perfect Noelle, and quiet Jessie—aren’t exactly excited by the arrival of the pint-sized powerhouse. Especially since Britt has a way of saying the wrong thing at all the wrong times. But, Britt’s not scared of a challenge: she’s an Elite Gymnast, and she didn’t get there without taking some major risks. She’s determined to become friends with the other Texas Twisters, whether they want her to or not. [$5.99 – Order directly from Amazon, also available for Kindle] 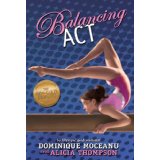 Balancing Act: Twelve-year-old Noelle Onesti has gymnastics in her blood. Not only does she have natural ability, talent and drive, but back in Romania, her mother was also an Elite gymnast. So if there’s one girl destined to come home with a gold medal at the Junior National Championships, it’s Noelle.

But Noelle’s a worrier, and she knows it won’t be easy for her family to put up the money to send her to the competition. She tries to focus on her training, but when a boy asks her to the school dance, her mind is a whirlwind of dresses, crushes, and family responsibilities. Noelle knows that if she wants to achieve her Olympic dreams, she can’t let anything get in the way. Her teammates—graceful Christina, quiet Jessie, and lively Britt—can’t wait for the trip to Junior Nationals in Philadelphia, and Noelle doesn’t want to let them down. [$5.99 – Order directly from Amazon, also available for Kindle] 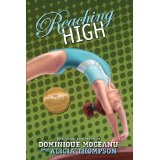 Reaching High: Long-limbed, red-haired Jessie might be the quiet girl on the Texas Twisters, but she’s a force to be reckoned with where it counts—on the vault and in her heart. With freshman year on the horizon, Jesse decides that it’s time to stop hiding in the shadow of her teammates and do the last thing anyone expects: join the cheerleading squad. Jessie proves that her gymnastic skills make her a perfect fit for the team, and becoming friends with the team captain makes Jessie feel like people care about her, and not just her talent.

But with cheer practice suddenly taking up all of her spare time, Jessie barely gets the chance to see her fellow gymnasts. Can Jessie bridge the gap between her new teammates and old friends? Or will she have to pick between being a cheerleader and being a gymnast? [$5.99 – Order directly from Amazon, also available for Kindle] 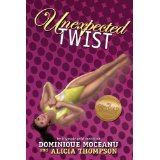 Unexpected Twist: Christina has waited her whole life to make it big. And now she’s ready—to be the star of the Texas Twisters, on her way to becoming the first Junior Elite all-around champion at the American Invitational. The pressure is on, and there’s no turning back. But practice takes a turn for the worse when Christina lands her vault routine with a sharp pain in her ankle; it’s clear that she’s been pushing herself a little too hard.
A forced break from gymnastics is not what Christina had in mind with the biggest competition of her life coming up. Her whole world revolves around the gym, but now she’s not sure what to focus on. Hanging out with the other Twisters—best friend Noelle, spunky Britt and caring Jessie—isn’t the same when she’s not totally part of the team. The only person who seems to understand is Mihai, Noelle’s older brother. But boys are the last thing Christina should be thinking about if she wants to get back into peak condition, right? [$5.99 – Order directly from Amazon, also available for Kindle]

I gave the first two books, Winning Team and Balancing Act to my daughter – a 10 year old swimmer and her best friend – an 11 year old gymnast who is on the fast-track herself, and they both loved the books. The day I gave them the books was a day I drive carpool and instead of their goofy, silly selves telling jokes, making up stories and giggling the ride was silent. They were each deep into the books! The next day when I picked them up from school each girl had the book in hand but all of a sudden the conversation was all about the character’s in the book – they were comparing what was happening in each book, talking about the girls in the book as if they knew them and saying how they couldn’t wait to switch books. The girls are really looking forward to the last two books in the series, too.

I highly recommend the series for anyone who loves gymnastics, but I don’t think being a gymnast is a requirement for enjoying the series as they are still basically stories about friendship, fitting in, overcoming obstacles and going for your dreams!

Disclosure: I received the first two books for review but all opinions are my own. 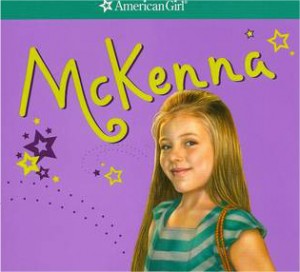 Call it a coincidence or call it savvy marketing, but either way call it $$ signs for the American Girl company as their Girl of the Year for 2012 vaults into the limelight just in time for the London 2012 Olympic Games! That’s right, McKenna Brooks, the star of the year for American Girl is a GYMNAST. Her collection which will include (at a minimum) the doll, outfits, accessories, two books and a movie are sure to be a huge hit with little girls across the nation.

Now, I happened to be a bit biased and know that some people will scoff at the idea of spending $100 for a doll, but her stories will be meaningful for the 8-12 year old set and I am sure the messages will be positive. The book summaries go like this:

There is a movie in the works as well, starring Jade Pettyjohn as McKenna. I am not sure if the movie is being released with the doll on January 1, 2012 or will come later in the year to renew interest in the line as the Olympics approach.

For more information about the American Girl of the Year 2012, McKenna Brooks including a picture of the actual doll, visit my other site, www.dolldiaries.com. The official release date of the books is December 27, 2011 and the debut of the doll should be January 1, 2012.  It will be interesting to see the various press coverage of her debut and in the week’s after her release.