(Click on the video above to watch it with a 30 second commercial or  click through to watch the 4 minute segment without the commercial on this amazing young athlete!)

Gymnasts are a rare breed. They are tough. They fall and get back up, they fly through the air from bar to bar, vault over inanimate objects that are as big, if not bigger, than they are and they perform complex series of skills on a beam that is 4″ wide and 4′ off the ground. And, they do all of this willingly, day after day!

ABC News did a feature on a gymnast that is even more extraordinary than most of her peers, because she does her gymnastics without being able to see that bar clearly! Eleven year old Lola Walters is legally blind, yet she doesn’t let that stop her from doing the things she loves to do. The Level 6 gymnast relies on her friends to tell her where and when to start her run for vault and she doesn’t even see the board to jump off of until she is about 5 feet from it – that is amazing when you consider most Level 6 gymnasts start their run for vault about 50′-65′ away from the vault.

Lola, you are an inspiration to us all! Keep up the hard work. 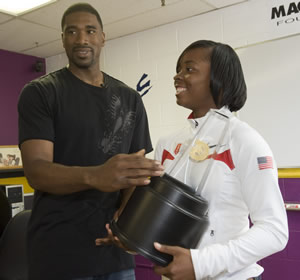 Ashton, a 5-foot-8 senior sprinter, won the 100-meter dash with a time of 11.17 seconds and the 200-meter dash in 22.90 at the California Interscholastic Federation state championship meet this spring, leading the Mustangs to a fifth-place finish as a team. Her 200-meter time ranks as the nation’s No. 1 clocking among prep competitors in 2010, while her 100-meter time ranked No. 2. Ashton’s season-best 100 ranks sixth in prep history and only eight prep girls have ever run a faster 200.

In celebration of the larger 25th anniversary, Gatorade is hosting an online poll, which will allow you to decide the greatest girls track & field athlete of all time. You can cast your vote for your favorite athlete of all-time once per day at http://playeroftheyear.gatorade.com/25th/vote/.

Ever wonder what Olympic athletes do for basic conditioning and strength training? Check out this exclusive Under Armour Workout video of U.S. Olympic skier Lindsey Vonn.

Personally, my favorite exercise in there is the medicine ball toss she is doing with her trainer while lying on her side. That exercise engages so many of the lesser used, but very important core muscles that Lindsey needs for making split second lateral adjustments as she is racing down the slopes. The other exercise that she has in her workout that looks so hard but perfect for her sport is the skier squats she is doing on the large balance ball towards the end.

It is always fun to get a behind the scenes look at our favorite athletes! Thanks to Lindsey and Under Armour for sharing this with all of us.