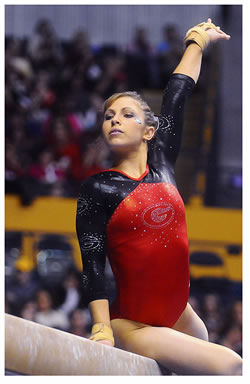 Former Olympian and now 3 time NCAA All Around Champion Courtney Kupets from University of Georgia is just amazing. Thursday Kupets scored her 5th perfect 10 of the season (on beam) to secure her third NCAA All Around title. Kupets’ All Around score of 39.80 ties the NCAA record set in 1995 by Jenny Hansen of Kentucky who also won 3 NCAA All Around titles. She also qualified for event finals in all 4 events. WOW.

As Courtney Kupets comes to the end of her NCAA career one only wonders if she is done with gymnastics or will she return to her former club Hills and decide to go Elite again. If anyone can do it, it is Courtney. I have had the pleasure of following the careers of both Courtney and her older sister Ashley (also a very successful UGA gymnast) since they were little kids. I distinctly remember them at early meets (when they were 7 & 8 ish) – there was something about them that left an impression on me then. Courtney has gone on to fight back from multiple injuries both as an Elite gymnast and as a collegiate gymnast (an Achilles injury kept her from last year’s NCAA) and every time she comes back she just looks stronger than before.

The top four individuals, plus ties, on each event in each prelim session qualified for the individual event finals which will be held on Sunday. (Complete results from preliminaries)

In the team competition, five of the six teams advancing to Saturday’s Super 6 are from the strong SEC conference. The teams include:

While Utah barely squeaked in winning a tie-breaker with UCLA, Utah is considered to be the only team with a chance at dethroning the mighty UGA team. Georgia is banking on winning their 5th straight NCAA team title in their coach, Suzanne Yoculan’s final season. Yoculan is retiring at the end of this season.

Thursday’s competition is just the beginning of an exciting weekend of college gymnastics (both the mens and the womens titles are on the line this weekend.) You can actually watch coverage of the meet online – here is the viewing schedule. Or watch the Women’s NCAA National Gymnastics Championships May 9 on CBS at 12 PM ET. 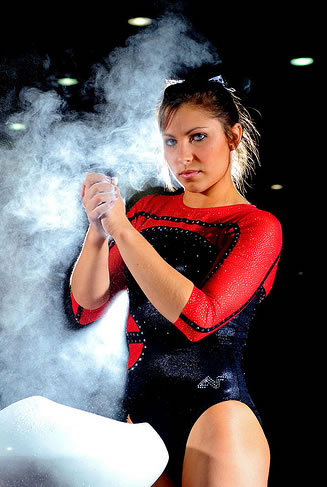 Looking for ways to keep kids in the sport longer? Try this one – coaches take your team (or parents take your athlete) to a college level game or competition in their sport.  Seriously!

While college sports are a lot of work and there are limited spaces and scholarships available, they are fun and are a viable goal for many high school aged athletes.

In a recent discussion with Megan at Because I Played Sports, we both agree that exposing kids to a variety of levels in their sport is important for helping them decide where they fit in – from a local high school team, division 3 college, junior pro team, to everything in between – and will ultimately help keep kids in sports longer.

Over the weekend a group of gymnasts from our gym went to the NCAA Regional gymnastics meet held at UNC.  In that meet alone they were exposed to a varying level of skill, intensity, and team spirit. I asked some of them what they thought of the meet and they all loved it. However, it was interesting to see how a few of the girls could really relate – they saw gymnasts doing skills they train everyday.

I also think it was helpful for the girls to see that the teams were all different – from the coaching styles, gymnast skill levels, and the overall team chemistry. For some of the girls who are in high school it helped re-energize them – giving them a new goal to work towards.

In addition to the basic benefit of exposure for your athletes, college sports are an excellent entertainment value as ticket prices are usually inexpensive – plus, they are just FUN!

PS – looking for a fashionable way to show your support of your favorite team? Check out these great ladies team shirts done with Swarovski crystals and a great feminine fit.

It’s mid-January and half of the US is freezing cold today, but that will not stop thousands of girls from going to sports practice today! It has been a busy week in girls sports this week and I have plenty of good articles to share with you.