We all know she can swim, but can Natalie Coughlin dance, too? We’ll find out tonight on the season 9 premier of Dancing With the Stars. Olympic swimmer Natalie Coughlin is paired with 5 season veteran and season 1 co-champ Alex Mazo.

I am guessing that Natalie will be the 13th act to perform tonight as according to her Twitter stream her vote number is 1-800-VOTE4-13. Personally, 13 is my lucky number and we will certainly be voting to make sure it is her lucky number, too.

Watch Natalie’s first DWTS interview with Alex on learning to dance and how she thinks she will do from TVGrapevine.com: 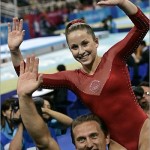 In 2004 when gymnast Carly Patterson won gold at the Olympic Games, the world was dazzled by her amazing gymnastics and bubbly personality. Five years later, Carly is going for a different type of gold – in the form of a new album. Below is the official press release, however, in the days to come we will be announcing a giveaway where three readers can win a copy of Carly’s CD and we are going to be doing an interview with Carly, with questions from gymnasts themselves.

Carly is going to host a live chat with her fans on Stickam.com on Thursday, August 27 at 5pm CST. For more information, please visit: http://stickam.com/carlypatterson.

From the official press release:

CARLY PATTERSON’s new album, Back to the Beginning is available now! 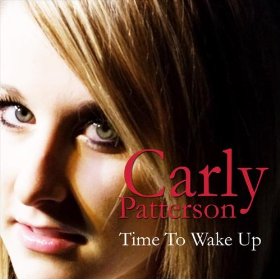 The Chicago-based MUSICMIND RECORDS has signed former Olympic Gold & Silver Medalist CARLY PATTERSON to an exclusive recording agreement with plans to promote Carly’s debut album with a full scale promotional tour, guest appearances, and etc. The label is distributed by Federal Distribution, a division of Universal Music Group and has announced release of Carly’s debut album, Back to the Beginning on August 25th, 2009.

“We are extremely excited about Carly. She is poised to emerge as one of the unique music discoveries for 2008”, says Anthony Ferguson, General Manager/A&R for MusicMind Records.

Born in Baton Rouge, Louisiana, the 20-year-old Carly Patterson has come a long way in such a short period. The gymnast made her debut at the senior international elite level, winning back-to-back American Cup titles in 2003 and 2004, as well as the title of 2004 U.S. Co-National Champion. Patterson was also a member of the 2003 World Championship Team where she won a Silver Medal in the all-around and helped lead the U.S. to their first ever World Championship team Gold Medal. It was also at this competition that Carly’s signature beam dismount (an Arabian double front) was officially named “The Patterson”. At the 2004 Olympic Games, Carly and her teammates earned the silver medal in the team competition. It was also at this competition that Carly became the first American woman in 20 years to win an Olympic Gold Medal in the all-around title category since Mary Lou Retton.

In 2006, Patterson decided to retire from Gymnastics after having lower back issues and to pursue a life long passion of becoming a recording artist. Since the games, Patterson has stayed occupied with event appearances (gymnastics related and otherwise), landed a number of high profile corporate sponsorships, appeared in a Mobile ESPN commercial aired during Super Bowl XL, appeared on Celebrity Duets (produced by Simon Cowell of American Idol fame) and finished her authorized biography, which is currently in bookstores nation wide.

Carly is currently visiting radio and TV in support of her album and has recently released the music video for her single, “Time to Wake up”. With the assistance of Universal/Republic, MusicMind Records plans on garnering national and international recognition for Carly Patterson’s August 25th, 2009 CD release.

Additionally, Carly is going to be doing am exclusive live chat with her fans on Stickam.com on Thursday, August 27 at 5pm CST. For more information, please visit: http://stickam.com/carlypatterson

Stop back in later this week for more on Carly and her debut album! 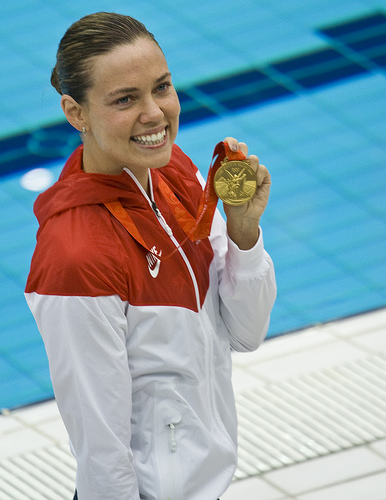 The season premiere will be September 21. Natalie Coughlin will be joined by 15 other contestants including Tom DeLay, Donny Osmond, Kathy Ireland, Kelly Osborne, Melissa Joan Hart and more.

Coughlin is excited about having the opportunity not only to learn to dance but also to train hard at something else besides swimming. I know we will be looking forward to seeing what she can do and cheering her on!