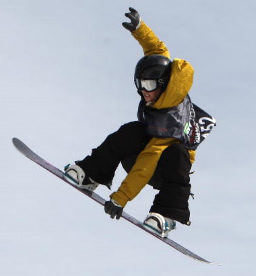 Australian Olympic snowboarder, Torah Bright, has withdrawn from the 2010 Winter X Games after hitting her head on the ice in training and suffering yet another concussion.

According to The Australian,

Bright was training in the half-pipe at Aspen, Colorado, yesterday to prepare for this weekend’s Winter X Games, when she missed the landing on one of her standard tricks, a switchback 720 (double spin), and struck the back of her head on the ice floor of the bowl.

She was taken to Aspen Valley Hospital for precautionary scans which cleared her of any serious injury, but she has withdrawn from the X Games, which was to have been her last competition before the Olympics.

Bright played down the mishap as “a bit of a fall” and said it would not affect her preparation for the Winter Olympics.

Let’s hope she has a speedy recovery with no long term effects from that fall and can show off her crazy new skill, the “double cork” in Vancouver later this month.

Here is a great documentary piece on Torah Bright for Roxy

where she talks about riding the “White Wave”, her hopes, dreams and her worst snowboarding injury.

Ever wonder what Olympic athletes do for basic conditioning and strength training? Check out this exclusive Under Armour Workout video of U.S. Olympic skier Lindsey Vonn.

Personally, my favorite exercise in there is the medicine ball toss she is doing with her trainer while lying on her side. That exercise engages so many of the lesser used, but very important core muscles that Lindsey needs for making split second lateral adjustments as she is racing down the slopes. The other exercise that she has in her workout that looks so hard but perfect for her sport is the skier squats she is doing on the large balance ball towards the end.

It is always fun to get a behind the scenes look at our favorite athletes! Thanks to Lindsey and Under Armour for sharing this with all of us.

I have multiple web sites, and one of my other sites is dedicated solely to kids printable activities. In celebration of the upcoming Winter Olympics I just created a Winter Olympic Sports Word Search and of course, I had to share it with my Sports Girls Play readers, too!! 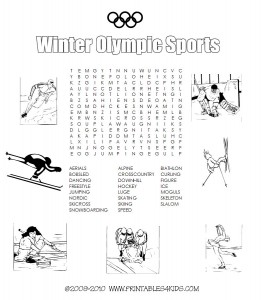 Click on the image to get the printable version of the word search or go to Printables4Kids.com for even more sports printable activities for kids of all ages. And if you are looking for Team USA gear to wear in support of your favorite winter olympic athletes, click here for a great selection of Winter Olympics gear.