Make It of Break It is a new ABC Family TV series based on the dramatic life of teenage gymnasts “going after the dream.”  The show is scheduled to premier on June 22nd and I’m not really sure how I feel about this show now that I have watched the extended preview.  Of course, so much is for dramatic effect!

Set in the world of competitive gymnastics, “Make It or Break It” follows a group of teen Olympic hopefuls as they train and prepare for their day in the spotlight. The cast of “Make It or Break It” includes Chelsea Hobbs (“Lords of Dogtown”) as gymnastic newcomer Emily Kmetko; Ayla Kell (“CSI: Miami“) as top gymnast Payson Keeler; Josie Loren (“17 Again“) as the beautiful gymnast Kaylie Cruz; Cassie Scerbo (“Bring It On: In It to Win It”) as ultra competitive Lauren Tanner; and Zachary Burr Abel (“The Secret Life of the American Teenager“) as the gym’s resident hottie, Carter Anderson. Peri Gilpin (“Frasier”) and Candace Cameron Bure (“Full House”) both make a return to series television in starring roles on “Make It or Break It.”

For those of us who have been involved in the sport for so many years, we will cringe at the flurry of over dramatizations and inaccuracies – but we will watch it anyway – for the gymnastics. We can’t help ourselves.  But the scenes and storyline around the gymnastics – they may just  be too much for me to stomach! So, the big question remains – will the series help or hurt the sport of gymnastics?

I do, however, LOVE this quote from the trailer:

Behind every great champion there is a greater story.

This really is true – and that is what often draws us to a sports story – its not always the performance rather the back story that is so compelling.

What do you think? Will this series have staying power? Will it soon be forgotten? Will the gymnastics and story line be too cheesy to stomach? Only time will tell – I will have to watch the premier!

Set your DVR for October 12, 2008 to ABC from 4-6 PM as Shawn Johnson, Nastia Liukin, Alicia Sacramone, Samantha Pezsek, Chellsie Memmel and other members of USA Gymnastics put on a star studded gymnastics event in conjunction with Frosted Pink with a Twist.

The event, which was organized to raise awareness and money for women’s cancers, was taped in San Diego on September 14. Frosted Pink with a Twist brings together sports, music and celebrities for a great cause and a wonderful show.

For photos of the “Pink Carpet” event, check out this whole group of them on Flickr. 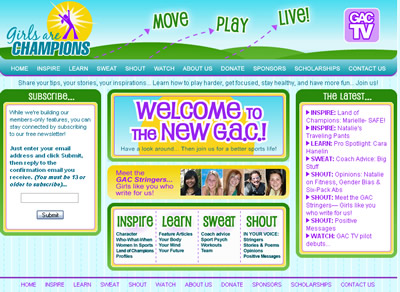