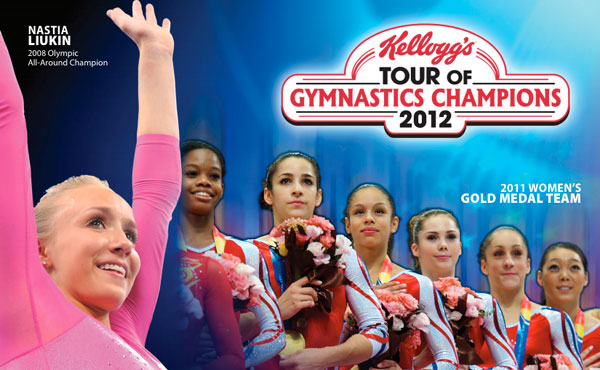 2008 Olympic all-around champion Nastia Liukin and members of the 2012 U.S. Olympic Team will kick-off the Kellogg’s®Tour of Gymnastics Champions on Sept. 9 in Ontario, Calif.  The 40-city tour runs through Nov. 18 and will make stops in cities big and small across the United States, including Las Vegas, Dallas, Kansas City, Mo., Minneapolis, Louisville, Ky., Hartford, Conn., Washington, D.C., and Brooklyn, N.Y., to name a few.

“The Kellogg’s Tour of Gymnastics Champions will be unlike any previously produced,” said Steve Penny, president of USA Gymnastics.  “We plan to celebrate the many wonderful things gymnastics means to young people, along with showcasing some of the biggest names in the sport.  Our fans will truly enjoy connecting with the U.S. Olympic team following their accomplishments in London.”

“USA Gymnastics has produced countless memorable moments throughout the history of the Olympic Games,” said Kellogg U.S. Morning Foods President David Denholm.  ”Kellogg’s is excited to help bring the incredible athletes who create these moments to fans, even after the Games have ended, as part of our official partnership.”

Led by Tour spokesperson Liukin, the cast of gymnastics champions will be joined by local gymnasts at each tour stop. The Kellogg’s Tour of Gymnastics Champions starts Sept. 9 in the Los Angeles area and ends on Nov. 18 in Brooklyn at the Barclays Center.

For a full schedule: Kellogg’s Tour of Gymnastics Champions or select from the city list below to go directly to TicketNetwork for ticket availability: 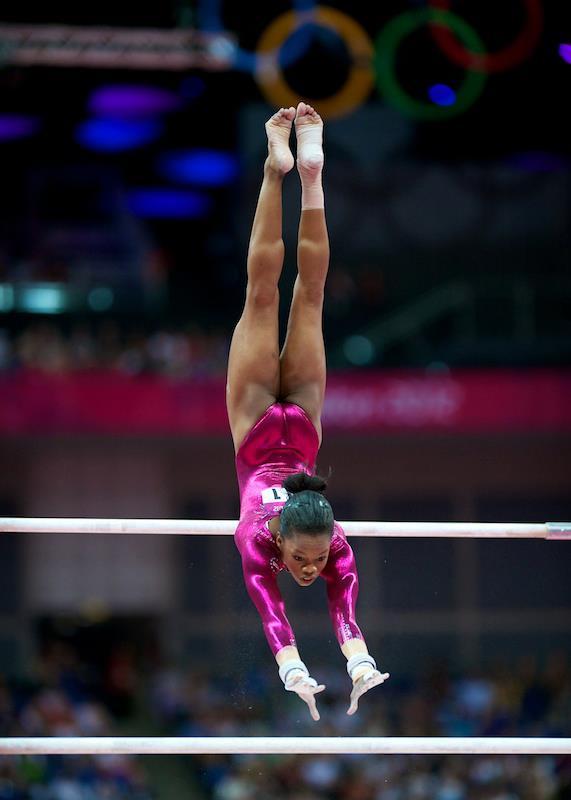 Congratulations to the new Olympic All Around Champion in Women’s Gymnastics – Gabby Douglas! I honestly can not wait to see the coverage of the meet this evening in prime time since I was away from my desk and had to “watch” this epic competition unfold before my eyes on Twitter. (On a side note, the tweets from around the world from those watching the live fee were priceless – I’d venture to say better coverage than the commentators at times.)

When all was said and done, Gabby Douglas was first, Viktoria Komova of Russia took silver, Aliya Mustafina of Russia and Aly Raisman of the US tied for third. Unfortunately for Aly, FIG rules require the tie to be broken using the top 3 event scores for each gymnast. Aliya edged out Aly.

From all that I have heard reported – Gabby and Viktoria both went 4 for 4 – meaning no major mistakes for either of them. Aliya and Aly both had issues on beam, but were solid everywhere else.

As much as I am so happy for Gabby – especially having watched her grow up in the sport since her first State Meet in 2004 – I am really wondering what will happen next. Will she continue to train at Chow’s? Will she return home and train locally (and if so, where considering the drama behind her leaving Excalibur – the club that deserves just as much credit for developing her as Chow does)? Will she continue to train for Rio or will she opt to finish High School and compete in the NCAA?

And what about Aly? Four more years or college? I guess only time will tell, but in the meantime, I am proud of all our athletes, their performances and the hard work it took for them to get there!

The Fab Five were golden today, putting up solid routines on all four events to solidly win the 2012 Olympic Gold Medal in the Women’s Gymnastics Team Competition!!  And believe it or not, that is only the second time in history the USA has won team gold in the Olympics for the women’s team competition! 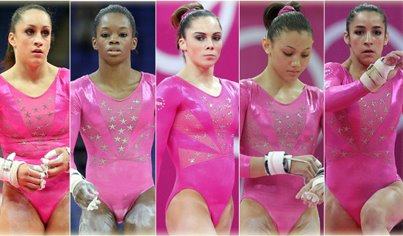 Congratulations to Jordyn Wieber, Gabby Douglas, McKayla Maroney, Kyla Ross, Aly Raisman, their coaches, teammates, parents and friends – all of whom made this day possible for these five amazing young ladies!  You have made us all so proud!

Do you have your Team USA Olympic fan gear yet?