Whenever the Olympics roll around, you hear quite a bit about the professional sports leagues and how many of their players will be representing various countries at the Olympics. The Women’s NBA is no different. At last count 30 WNBA players (current and former) will be playing in Beijing for their respective countries. Here is the latest list (from the WNBA site):

On the U.S. Women’s Olympic Team

* Many of the rosters have not yet been finalized and I do expect this list to grow somewhat.

We had so much fun at the USA Gymnastics Olympic Trials that the anticipation for the Olympic Games is building rapidly. Here is a photo I took at the Trials as they set off four big cannons filled with confetti and blanketed the arena. 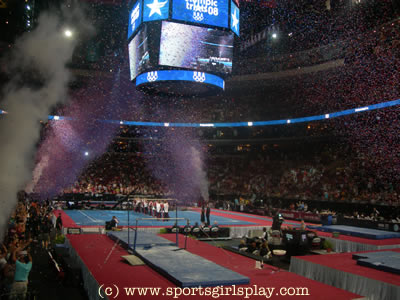 New York Liberty basketball star, Shay Doron, is an amazing example for kids! PressPassTV recently produced a very nice piece on Shay as she returned to her alma mater, University of Maryland, as they retired her #22  jersey.