I tuned in to the US Figure Skating Championships over the weekend. With the 2010 Olympic Games right around the corner I wanted to see some of the faces to watch for myself.

Alissa Czisny was just the most gorgeous performer on the ice. Her costume was one of the most stunning outfits I have seen in ice skating in ages and I can’t help but think she looks a bit like Nancy Kerrigan with her long lines and huge smile. While she made a mistake in the long program, Alissa was clearly the winner in my eyes – others are not so sure.

Rachael Flatt may be very consistent and technically clean, but as far as I am concerned, her performances are a little bit… flat.  I have seen her skate a few times now and I just never get captivated by her performances. She definitely needs to learn to sell her routine to the judges and the crowd a bit more before taking to the ice in Vancouver.

Mirai Nagasu reminds me of so many upper level athletes in their teens. She has invested so much time in her sport and is now fighting her body (injuries, puberty, growing). Mirai was almost in tears as she took to the ice – seriously looking like she dreaded the moment. However, as she completed each move and landed each jump you could see her confidence and enjoyment return slowly. By the end of the performance she was smiling and truly happy with herself. I really like her skating and hope this was a the beginning of her return to the top. 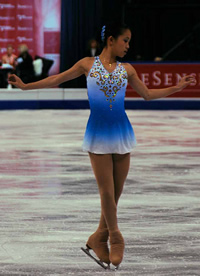 Caroline Zhang is definitely one to watch! The 15 year old knows how to sell her skating and captivates you with her gorgeous dance, big jumps, and you can tell she is really into it.

Ashley Wagner was the winner of the long program and unfortunately I did not see her performance.

Top skaters Kimmie Meissner and Emily Hughes were out with injuries – hopefully they will be back in competition soon.

It will be interesting to see which of these seven women will be representing the United States in the 2010 Olympic Games. Who do you think will make it? Or is it too soon to predict?

U.S. Champion figure skater Kimmie Meissner’s run of bad luck has continued. Meissner, who spent the past year battling mono, a growth spurt and coaching change, has injured her hip. She initially injured it while running on the treadmill last week in training, but reinjured in doing a jump in preparation for this week’s 2009 U.S. Championships in Cleveland.

Her injury is severe enough to cause her to withdraw from the Championships. Hopefully she can rest it, get treatment and return to train in time to be ready for Stars on Ice later this season. Meissner was hoping to use her performance at the US Championships as a indicator of her readiness for the 2010 Winter Olympic games in Vancouver.

The winter olympic games of 2010 in Vancouver, BC will be here before you know it! This weekend’s Skate America competition is just one of the many competitions that ice skaters are using to set their stage for 2010. Skate America kicks off today with competition going on through Sunday.

Additionally, it is rumored that Japanese skater, Miki Ando, has been landing “quads” during the practice sessions.  There are an additional 8 skaters in the ladies program which should make for an exciting competition all the way around.

Which Olympic stars will begin to emerge this weekend? Who do you think will be crowned champion at Skate America this year?