Although Sasha Cohen failed to make the US Womens Figure Skating Olympic Team by finishing 4th at this past weekend’s national championships (well, technically she is the second alternate), the one thing she brought to the competition was extreme grace and flexibility. In addition to her ice skating training, Sasha has years of ballet experience and in the past three years she has added yoga to her list of off-ice training methods.

One of the benefits of yoga according to Sasha is injury prevention thanks to the additional core strength and increased flexibility she has gotten from yoga training. She says she does yoga 4-5 days a week whether she is traveling or not.

If you are interested in incorporating yoga in your conditioning program or just giving it a try, check out any of these DVDs for a start:

What’s your workout plan for today? 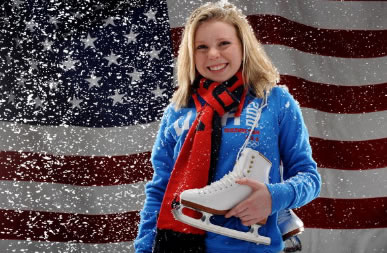 Seventeen year old Rachael Flatt, the 2008 World Junior Champion and 2008 US Championships silver medalist, has her sights squarely set on the 2010 Winter Olympics in Vancouver. After a short holiday in Hawaii this summer, Rachael is headed back to the ice, working with her mentor Dorothy Hamill, training and getting ready to make her mark on the world. LifeSkate.com spent a few minutes with Rachael earlier this summer and asked her about summer, her plans for the future and getting ready for the Olympics.

And like most 17-year olds, Rachel is now back in school – juggling class work and training – and as a high school senior, college applications. The Olympic hopeful has mastered the secret strategy for successful student-athletes – time management! Her typical day is spent between public high school (and AP classes none the less), training on and off-ice, prepping for SATs and college applications and trying to keep the balance!

The Olympic trials for ice skating will be held in conjunction withe US Nationals to be held January 14-24, 2010 in Spokane, Washington. This will allow approximately four weeks of training for the team prior to the Olympic games.

On the subject of the games, check out the gorgeous Vancouver 2010 Olympics Gear that has just been released!

Even though she has not competed since 2006, Olympic silver medalist, Sasha Cohen is planning a comeback for a shot at competing in the 2010 Winter Olympics in Vancouver according to USA Today and Sasha’s official website.

Even though Sasha has not competed since 2006, she has stayed fit and has been skating as part of the Smuckers Stars on Ice Tour. Not surprising, she has been one of the tours’ most popular skaters thanks to her amazing flexibility, dynamic performances and her already established fan base.

According to her site:

It’s a good possibility that Sasha’s first competitive skate will be at Skate America, which is November 13-15 at Lake Placid, N.Y. U.S. Figure Skating executive director David Raith said Friday it’s a “logical assumption” she will be at Lake Placid.

Grand Prix assignments will be made May 30. Because Sasha didn’t compete in last year’s Grand Prix series, she is not automatically eligible for this season’s events and has to be invited by the individual organizers. “She’s not automatic. But I think when her name shows up on the list, she’ll be one of the first chosen,” Raith said.

Skate America has the first rights to Sasha. Raith said he also thinks one of the earlier events — Trophee Eric Bompard in Paris, the Rostelecom Cup in Moscow or Cup of China in Beijing — will have interest.

Sasha is definitely one of my favorite figure skaters of all time along with Joannie Rochette. What do you think – can she make the comeback? I think she can, but time will tell!